Sadly, anti-gun nuts have reached a new low in America. They’ve decided that your personal information as a gun owner should be made public, regardless of the risk it imposes upon you. Apparently, exercising your rights under the Constitution is now akin to being a sexual predator to these zealots since they feel in both cases, the public should be aware of who you are and where you live. 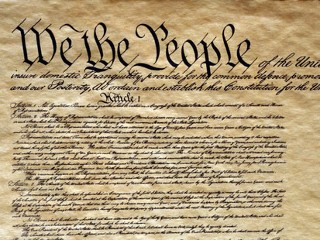 The Journal News in New York, in order to further its hateful agenda, decided to publish the locations of all registered handgun permit holders in the Westchester and Rockland counties without disclosing any logical reason for doing so. So it merely appears motivated by a desire to put those who applied and were granted a permit for a handgun at undue risk as if they are by default, a danger to society.

I certainly love the US Constitution, and am quite in favor of freedom of the press, but this clear invasion of people’s privacy has to be a sign for Americans to stand up against pervasive Freedom of Information Act (FOIA) requests, which allowed this data to be disclosed in the first place.

If attaining a permit is considered a matter of public record, then where does it end? If I’m driving down the highway and I see a beautiful woman I’d like to meet; I can’t take down her license plate and file a FOIA request to get access to her address and phone number in order to more easily stalk her. That would be a huge violation of privacy, and no  one outside the rapist community would support that. The government has her information since she applied for a drivers permit, but that shouldn’t mean I have the right to know that data.

So let me give a similar analogy to what has transpired here. Imagine I decided to request drivers license information for all females in the district and published their names and addresses. Maybe I think female drivers are dangerous just like this newspaper thinks gun owners are dangerous.  Therefore, I want you to be protected from these dangerous women drivers.

Both cases involve people asking for information about lawful citizens who have done nothing wrong, but instead merely applied for a driving permit or a gun permit. Since there are a greater percentage of deaths by car in relation to car owners as there are deaths by gun rational to gun owners; clearly we need to know who has a license to drive, right?

Obviously I’m being facetious, stats show women are generally very good drivers, just as stats show gun owners are rarely violent. But my argument against women drivers is EXACTLY the same as the anti-gun zealots arguments against lawful gun owners. For every one of them who wrongfully harms someone, there are thousands upon thousands who have never, nor will never harm an innocent being. Yet these sanctimonious people have decided that if one gun owner is bad, they must all be. There’s a word for that kind of nonsense; B-I-G-O-T-R-Y.

Reasonable and intelligent people just agree to disagree, but the anti-gun zealots that do these kind of things can’t bring themselves to do that. If you don’t agree with them, in their mind, you’re the most hateful S-O-B on the planet, and they have no qualms about destroying you; feeling better about themselves for having done so.

To them, gun owners are pure evil, and these journalists feel like Batman thwarting the Joker by taking them down. Responsible gun owners have been politely agreeing to disagree with those who don’t want guns for years. Charleton Heston never went to a anyone and tried to force them to buy a gun, yet these people are trying to force us to give up ours. 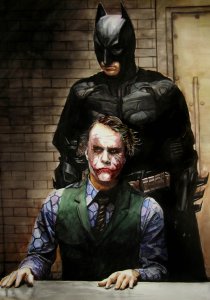 Responsible journalists used to go after a scoop and expose corruption, as in the Watergate scandal. They did mountains of work and networking, gathered evidence, corroborated that evidence, and made sure that what they wrote was fair, accurate, and accomplished noble goals like protecting the people from a corrupt government.

The hacks of today however, are too often a cult that worships their lord and savior currently residing at the White House. Instead of protecting the people from an oppressive government, they protect the government from the people revolting against an overreaching government by suppressing stories of corruption, while at the same time attacking the Americans who would stand and fight against such a corruption.

I’ve heard if you want to make Pecan Pie, you have to crack a few nuts, and some gun owners have decided that’s just what they’ll do. For example, the folks who made this yard sign below apparently decided to strike back against anti-gun advocates who take issue with their right to bear arms, and I’m sure in the wake of this story, there will be others: 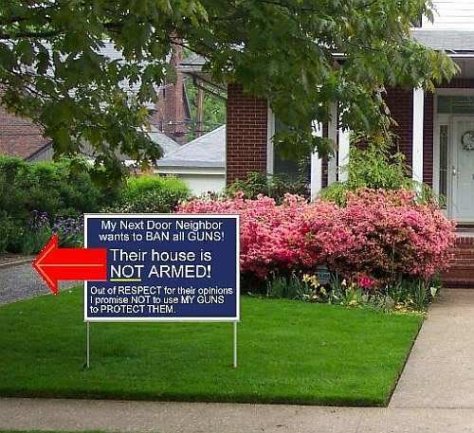 I think it’s logical to assume that criminals looking to steal a gun have just been provided a list of places a gun is likely to be found that probably isn’t as well protected as a gun shop. If they can case the place and catch the homeowners away—pay dirt!

So now that every lawful gun owner has legitimately been put in harm’s way, turning the tables sadly seems to be the only thing gun owners can do to get their attention. But I cannot condone putting the lives of these people needlessly at risk either—it seems hypocritical.

The sign above would make it clear to any would-be-robber, molester, and murderer, which house his odds of success are greater at and level of danger is less at. I understand the “eye for an eye” concept at play, but it still seems wrong.

With any luck, these are severe overreactions after a national tragedy that will subside as cooler heads prevail, but nonetheless, us responsible gun owners cannot just continue to allow ourselves to be abused by anti-gun wing nuts. However, instead of striking back as the in the above picture, I hope gun owners will instead look to solidify Constitutional liberty by calling for serious modifications to FOIA regulations all across the nation. It should be done so that private information is not disclosed under any circumstance, outside the investigation of a crime, unless that information may be infringing upon the rights to life, liberty, and property of another individual, such as the aforementioned sexual predators.

We cannot have liberty if we do not have privacy, and even anti-gun nuts deserve theirs. Sadly, while many people who don’t care to own a gun wouldn’t dream of exposing their gun owning neighbors to something as disgusting as this, there are the irrational hate mongers in the media who have no reservations about it. Instead of resorting to dangerous games, I hope gun owners will take the high road and demand our government be better caretakers of our private information. Because lawful citizens of all kinds should never be allowed to be put at risk by political rivals in order to further a political agenda.