I went to a local public school with a legendary band program. Our director had been there for decades, and as a result of his diligence, the school was constantly being invited to perform outside our state and even outside the country. Each year we competed, we performed an “A” rated piece, which are often the most difficult for high school programs, and we always received a “1” rating—the best possible score.

By the time I entered high school, this stellar band program with its aging director, was on educational cruise control. I was an OK trombonist, but I needed someone to give me a swift kick in the petoot. Not only did that not happen my first year there, I didn’t even qualify for the advanced band, and I hated it.

This great director was in his final year before retirement, and taking an interest in my musical future seemed of little interest to him. He wasn’t mean, but I was neither inspired, nor motivated by him either.

The following year, however, brought a new director named Don Nathan – a man who was young, full of steam, and knew he was filling some big shoes. He was also a man who would have been the first victim of last-in-first-out cuts if teachers’ unions had their way in their desire to protect veteran teachers.  His first order of business went something like this. 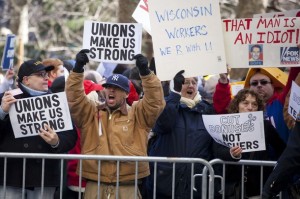 This band program has been going to contests, playing an “A” level piece, and getting a “1” rating for decades. Clearly you’re capable of more, and we’re going to do more.

This young teacher decided that, instead of filling legendary shoes, he’d one up them. Some saw it as arrogant, but I saw it as ambitious, and I loved it. He picked a majestic piece called Lincolnshire Posy by Percy Grainger. It was a beautiful work that I encourage any classical music buff to seek out. It was also an “AA” rated piece, which is often reserved for college level musicians and something we had never attempted before.

The piece was the most difficult challenge I had ever endeavored to play as a musician. For those of you who are musicians, you’ll understand the difficulty put forth by a piece with time signatures including 5/8, 13/16, and even instances with no time signature where we simply followed the conductor’s baton for each beat.

As I struggled to learn this piece, there was one section where I was the featured instrument, but, because I was still struggling to learn it, I played very quietly in fear of someone hearing how badly I was butchering this inspiring verse. In front of everyone, Mr. Nathan stops the rehearsal, looks over at me and asks, “Where are you? I can’t hear you.”

I explained I didn’t want my errors to be heard, and I’ll never forget his response: “It’s OK if you screw up, but at least screw up with feeling.”

This was 20 years ago, but I still remember this like it was yesterday. I advanced to the premier band–thanks to him pushing me—and I remember, most of all, doing something our great program had never before attempted to achieve. We went to contest, played an “AA” rated piece, and still got our “1.” I also remember our sense of accomplishment when we actually did what we feared we may not be able to do.

There are two lessons to be learned here, and I carry them with me always.

First, what you’ve done isn’t what matters; it is what you do in your future that will define you. Until you are dead, your legacy is not complete. One need only look at Joe Paterno to understand how a legacy can be destroyed in an instant.

If you look at some of the greatest successes in life, whether it be athletes like Tiger Woods and Michael Jordan or entrepreneurs like Bill Gates and Steve Jobs, all their interviews have a common theme. They don’t brag about what they’ve done nor rest on their laurels. They talk about what their weaknesses are and what they need to work on so that they can improve and be better.

Second, don’t be afraid to fail. If you’re going to do something, do it proudly, errors and all. Every business you see today started out as the financial risk of a dreamer, and they each could have failed. If you look at all they’ve done, they probably erred often along the way.

Steve Jobs got fired from Apple at one point, and Tiger Woods thrice reinvented his swing, playing horribly by his standards until he learned to trust his work and live with the results. But both achieved greater success as a result of forging ahead and facing their fears.

My cautionary tale is this. I have made no bones about my disdain for unions, and Mr. Nathan is one reason why. These are the two most valuable lessons I personally learned from high school. I owe Mr. Nathan for a lot of who I am as a person, and I can directly point to those lessons when I look at my successes in life. He was one of my favorite and certainly one of my best teachers.

However, he was one of our school’s newest teachers at the time. If there had been cuts, he would have been the first to go in favor of more tenured seat warmers that I sadly learned almost nothing from. I’d be a lesser man because of it. Lucky for me, I was in school during the Reagan years, and the economy was strong enough that didn’t happen.

I believe these lessons will help anyone, and I wanted to share them. I also hope you’ll fight to rid our schools of policies that would eschew great teachers in favor of the ones biding their time until retirement. It’s yours and your children’s future. Teach them well, and fight to be sure they are taught well by others.