Being the science buff that I am, I thought it would be fun to assemble a few basic science facts you may or may have not known. Wherever necessary, sources are cited. Enjoy.

One atom of carbon, such as petroleum fuels, under combustion such as in the engine of your car, produces 1.4 eV of energy. One atom of uranium converted to energy via nuclear fission, such as a nuclear reactor from a nuclear power facility?

Ever hear the term, “The observable universe?” The “observable” part has to do with the speed of light. If you look up in the sky, you are seeing light that has had time to reach you. So if something were 1 light year away, and it were a year old, it’s in the “observable” universe. If it is 1.1 light years away, and only one year old, it would NOT be in the observable universe. How could you observe it when its light hasn’t gotten here yet?

Many people believe that astronauts on the space station, the moon, the planets, etc., are floating in space with no real understanding of why they’re in orbit. Orbit just means that they are actually falling towards other objects they’re orbiting.

Imagine Earth as a big ball, which it is, and you’re standing on top of it. You hold a gun  horizontally and fire it. The bullet, like the ball’s shape, will have an arc to its trajectory. Gravity will pull the bullet to fall towards the ball. If the bullet goes too slow (Figure A), the bullet’s trajectory arc will be shorter than the shape of the ball’s arc, and the bullet will fall onto the ball. 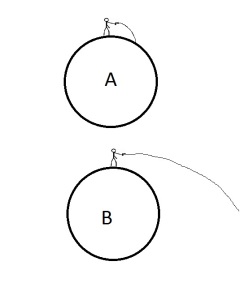 But if the bullet is too fast, the bullet’s trajectory arc will be larger than the ball’s arc (Figure B) and it will go away from the ball as the ball falls away from it.

Get it just right however, and the bullet will circle around the ball, falling forever. This is what constitutes orbit.

So when astronauts in orbit are ready to return to Earth, all they do is decrease their speed (They are doing about 18,000 mph while in orbit), and gravity does the rest.

After the holocaust, many people were skeptical of Nazi soldier’s claims that they weren’t necessarily in support of the movement, they were just doing what they were told. How could acts so heinous be done by people for no other reason than they were just following orders? Stanley Milgrim, a psychologist at Yale University, in 1963, aimed to find out.

He devised an experiment with “teachers” and “learners.” The teachers were the experiments, the learners were just actors playing a part.

The teachers were to ask the learner a question via intercom in a separate room (the teachers could not see the learners, only hear them). If the learner got the answer wrong, the teacher was to administer a shock. The shock wasn’t real, but the teacher’s didn’t know that, since they were part of the experiment. The learners got the questions wrong of course, and the teachers started shocking them, upping the voltage with each successive wrong answer as instructed by the person running the experiment.

As the learners cried out in pain, some learners even indicating they had a heart condition (remember, this was all a rouse, there were no actual shocks), the teachers kept shocking them. Some teachers expressed concern, and a few did stop, but most indeed did as they were told.

Unlike Nazi soldiers, the experiment directors were neither armed, nor threatening the teachers in any way, thus demonstrating that many Nazi soldiers indeed may have not been doing anything more than doing as they were told.

So why the boom? This has to do with the speed of sound, obviously. Imagine a plane were stationary, and sound was emanating from it. That sound is actually waves of energy hitting you at very fast intervals. We’ll say a thousand times a second for convenience’s sake, but that interval changes with frequency.

That sound takes time to get to you, and in that moment between the sound being created and you hearing it, you’ll hear nothing, even though the plane is making a sound, because the sound hasn’t gotten to your ears yet.

Now imagine the plane is coming to you at the speed of that sound (the speed at which a sonic boom is created). So its sound waves are traveling at you at a thousand times a second again, but each successive wave of that one thousand waves per second is 1/1000th of a second closer to you than the last one. Therefore, the plane, and all of those one thousand waves in that second are going to hit your ears at exactly the same time, instead of 1000 times over the course of one second, and BOOM!

Imagine you were to drop a bowling ball and a feather, which will hit the ground first? Everyone knows that the bowling ball, and the belief is because it’s heavier. But this isn’t really true, instead it’s about wind resistance. Gravity pulls on all items equally, and if there were no air to slow the feather down, which the bowling ball bores through much easier, the two would strike the ground at exactly the same time. Don’t believe me? See below.