The Associated press recently reported here that in Michigan, after a year of repealing their mandatory helmet law, motorcycle injury costs were on a significant rise. Since more riders are riding sans helmet, this makes sense. But is it a problem? I say yes and no.

As you may know, the Emergency Medical Treatment and Labor Act (EMTALA) which passed in 1996 prohibits a practice called patient dumping, thus requiring hospitals to treat critically ill or injured patients regardless of their ability to pay, or the reckless actions that may have put them in that situation.

EMTALA is a very good example of how one law often leads to another which is only justified by citing the first. We libertarians argue that the duty to protect our rights is the only duty of government. EMTALA gives the left a reason to use our own arguments against us by saying that we have to enact helmet laws to protect the public from having to pay for their reckless decisions, when if we didn’t have EMTALA in the first place, that wouldn’t be an issue.

Health care is part of the market place, but people often see hospitals as a public service like local police, fire, and rescue, then pass laws that treat them as such. Their argument being that if government has a duty to protect your life, then health care is, by extension, a right as well, and thus a role of government.

Why do I believe otherwise? Because government mandated health care means I have to pay for your poor choices; like doing drugs, over-eating, or riding a motorcycle without a helmet. Therefore, it violates my right to property to preserve your right to life. A conflict that only occurs if you choose the opinion of those pushing for health care as a publicly mandated service that must be provided to everyone. If it’s a private service available to those who can pay for it or those whom doctors choose to help pro-bono, the conflict is gone.

We feel it’s morally wrong to let someone die—I do to, to some extent. But it’s a moral issue, not a legal one. Just as I don’t want the government outlawing adultery, lying, or just generally being a jerk, I don’t want them outlawing the ability of a doctor to decide to help or not help someone who has done themselves harm—passing those costs on to me afterwards. 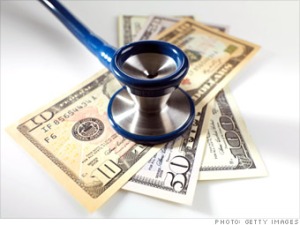 We all agree that when someone dies, it is sad, even tragic. But we also all know that no one gets out alive. Death is a natural and unchangeable part of life, at least for now. So if we understand we’re all going to die anyway, we cannot spend ourselves into oblivion trying to evade the inevitable.

When asked about the difference between libertarians and authoritarians, one of the distinctions I feel is often overlooked is that authoritarians are idealists, libertarians are realists. Authoritarians believe that government can create a Utopia if they just spend and regulate enough to rid the world of every immoral or dangerous act; creating a perfectly sterile and safe society. Libertarians see this as foolhardy and misguided goal.

While I generally abhor comparisons to Hitler; they’re so often hyperbole used for shock value, in this case it is somewhat appropriate here. Hitler also believe he could create a Utopia through ridding the world of all but the master race and by using advancements in genetic engineering. What he wanted to do violently and unethically, authoritarians aspire to achieve through legislation and regulation.

“The rich should all be like Bill Gates and Warren Buffett, giving their money away to charity and happily paying more taxes. If they don’t, we’ll legislate it away from them” is just a financial version of “People should all worship this particular god or be killed.” One is an infringement of property, one life, but our Constitution guarantees rights to both. So why tolerate the first if we wouldn’t dream of tolerating the second?

I don’t want a boring life without any danger, and I defy you to honestly tell me you’ve never done something reckless just for the thrill of it. But if we take the authoritarian mentality to its logical conclusion, all risky behavior will be illegal.

We ride motorcycles without a helmet (I alternated depending on my mood), jump out of airplanes, or engage in extreme sports because we enjoy the freedom and the excitement that comes from the inherent danger. Humans love pushing the envelope, and without it, we wouldn’t be happy. So doesn’t that defeat the point of a Utopia?

I’m sad for these people who got injured without helmets. I was wearing mine when I wrecked and despite my noggin surviving in tact, I still got a collapsed lung out of the deal. Maybe we should legislate a suit of armor for motorcycle riders, and training wheels while we’re at it? The last two of course seem silly, so why is the first not?

Risk is fun, but risk means there’s also a chance of harm. While death may be the downside of risk, no one wants to live in a world without it—we’d all effectually become drones.

So I say that Utopia is an oxymoron. It’s supposed to be a perfect world where everyone is happy, but human nature dictates that almost no one would actually be happy in a Utopia. So let’s always mourn the lost—I’m not arguing that death is good; but let’s champion the freedom that allowed them to live and die by their own accord instead.