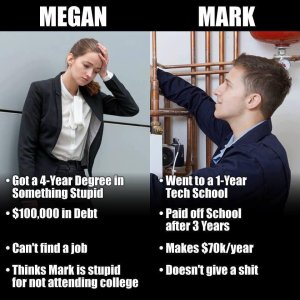 As memes become a pervasive influence in our lives, it’s important to always approach them with a healthy dose of skepticism. A good meme will cite sources that are credible, but many like this one largely just espouse a particular ideology, and aren’t exactly subject to fact checking. For the most part, they’re just intended to appeal to your emotions.
Nonetheless, it’s still worth questioning if the premise even makes sense, and this one is a perfect example of a meme that feels good, especially to someone who is like Mark in the meme, but is severely flawed in premise, despite the strong hint of truth in it.
So first, let’s address the logical argument to be made here.
In this country, it can be difficult to find a good career where a college degree isn’t required, even if the degree is unrelated to the career you seek. I find this notion of “any degree will do” infuriating, but sadly my beloved free-market, coupled with ignorance, likely created it. Although, I think a fair argument could be made that a lack of decent tort reform by government hasn’t helped either, which I’ll address as well.
Let me provide an anecdote to explain the hint of truth in this meme. I have a friend I worked with at a local GM car dealership. By law (Don’t get me started on this one), dealers are required to be independent of the factory, so there can be no factory-owned GM dealers, Ford dealers, or any other marque. Tesla, to their credit, took to fighting this, but they didn’t win.
Because the factory and the dealer are independent of each other, when someone takes their car in for a warranty repair, the dealer will fix it, then charge the factory for what they’ve done. The factory then will audit and sometimes inspect the parts replaced to be sure the dealer is not performing unneeded repairs, or fraudulent claims. 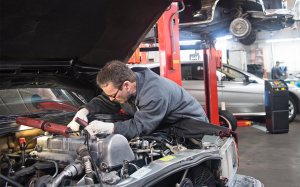 My friend had over a decade of experience working the parts counter at our dealership. He was intimately familiar with why parts were replaced under warranty, and how to assess the condition of those parts. This knowledge made him highly qualified to review and audit warranty claims for General Motors. So he applied for the corporate job, and was refused consideration because he had no college experience, despite his clear knowledge and expertise on the issue.
The person who was hired by GM to do this job did have a degree, entirely unrelated to automotive repair, and had almost no mechanical repair experience to speak of. As a result, their ignorance made it easy for us on the dealer side to take advantage of them, highlighting the flaw of choosing a college degree over relevant experience. It’s a bad business decision that can cost a company a lot of money.
Recently, as CNBC notes here, many tech companies are starting to see the light, and have removed the college degree requirement, understanding that there were a lot of talented people they were passing up. People who went to trade schools, or maybe just have relevant work history to the field. Kudos to them for recognizing this practice was less than ideal.
As for the tort issue, in some instances, if a company is worried about getting sued, having someone who is “qualified” by virtue of having a degree may help indemnify them. You see something similar in the auto repair field where a shop will hire an ASE certified mechanic over one who doesn’t have such certifications, even if the latter is clearly more knowledgeable, because this helps protect them in the event a car is improperly repaired, the shop can say they at least hired someone who was “certified.”

But what should matter is simply whether the person did the job correctly or not, and did the person have any relevant experience in auto repair, to the point they should be trusted to do such repairs.
The truth of the meme is that skilled trades can indeed pay quite well, often beating their college-educated counterparts when the degree is something with a very small job market. When is the last time you saw a job opening for a philosopher after all? This is not meant to attack philosophy, it’s an important way of thinking. It’s only to say that as a stand-alone skill, it doesn’t offer up many career opportunities outside of teaching philosophy.
The issue is a little deceptive however, because if many of these degree-holding future employees pursued a career related to their degree, they would likely land a more lucrative career. But sadly, I’ve known many who simply got a degree to have a degree, because that would help them find a career, and they took the path of least resistance by getting what they felt was the easiest degree possible, with no real interest in that field. 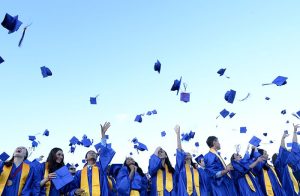 The problem with this meme is that it does the one thing it’s trying to prevent, and that’s to demean people who choose an alternative career path by going to college for a degree they might actually want to pursue a career in.
So instead of creating a divide, it would be better to understand that just as genetic diversity is incredibly important for the advancement of life, diversity of career also creates a stronger economy that isn’t in danger of collapse because it relies on others.
We need college-educated people to do things like cure diseases and engineer safe buildings. But we also need skilled trade people to do things like fix our cars, electric, or plumbing. We need people to mow our lawns, stock shelves, and do the things which require almost no training at all, too.
If you vilify any one of those people for their life choices, you’re behaving poorly. We need them—all of them, to do their thing. If you don’t want to do those things yourself, be thankful someone else is willing to do them for you.
If you want to lash out at someone, may I suggest these three groups instead?

1) The person who could be a productive person and do one of those jobs, but instead opts to live off the taxpayer, parents, or just becomes a vagrant.

To be clear, I’m not talking about the people who can’t work because of a disability. I’m referring to those who refuse to do their part in society, and worse yet, expect others like me to subsidize their lives.
2) The person who gets an education in a field they have no intention of using, gets poor grades doing it, and did it because they just didn’t want to work, or weren’t driven enough to commit to a career path. They wasted their parent’s money, or racked up student loans for a degree they’ll basically never use. That’s a bad investment at best, and potentially depraved indifference if they’re wasting their parent’s money willingly. Their parents worked hard for that money, and probably could have used it for something more worthwhile if their child hadn’t recklessly wasted it. 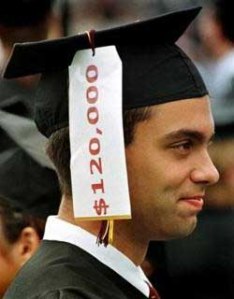 Since some do it on the premise you need any degree to get a good job, this leads me to my third group…
3) Employers who put people with an irrelevant degree (in relationship to the job they’re seeking), above people with real world experience in that role, but no college degree. Those college-educated employees have shown they’re uncommitted, and that they make poor life choices. The person who started working at 18 has shown that they just want to work.
One thing is for certain, whatever makes someone happy and solvent should not be condemned if it isn’t harming others, especially when they’re being a useful component to society. Diversity is always good, and all levels of career are required for a successful society—we can’t all be doctors or lawyers and expect the world to sort out its own problems. If you find yourself looking down on people who do or don’t have a degree because they’re different from you, the problem isn’t them, it’s you.