Gun laws are a pretty sensitive subject in America, regardless of which side of the issue you’re on. But it shouldn’t be.

Indeed they are our constitutional right, and I support that right whole-heartedly. But that doesn’t mean we can’t be fair, and debate respectfully on the subject with those who may hold a different view. After this last election, I hope we can all agree civility in political discourse has a lot of room for improvement.

People who argue with logic and reason, are far more likely to encourage more to side with them than people who insult, lie, yell, and behave anything but adult-like.

So with that being said, let’s break down a few of the common myths often bandied about regarding guns.

Any time Democrats propose new gun legislation, Republicans immediately go on the defensive and rile up the base by insinuating their opponents are trying to entirely disarm the populace.

But the base is already on their side, there’s no need to get them riled up. Not to mention, it’s entirely dishonest, and most who do it already know that.

Not a single law was proposed in recent history to remove all guns from private citizens, nor did anyone propose repealing the second amendment. If you feel the need to lie about your opponent’s argument to defeat them, think about what that says about you. It says you’re incapable of winning your argument on its merits. When you do this, you’ve already lost the moral and logical high-ground.

The effort should be focused not on the straw man argument that “they’re trying to take our guns,” but instead on the specific regulation being proposed.

This less than favorable opinion is often due to the constant infighting between the two parties, that is largely full of myths, hyperbole, misdirection, and occasionally bold-faced lies. Neither come off looking like professionals, or even reasonable people.

So the party that strives to be amenable to finding common ground, and deemed as the most civil and honest will win this fight.

The Republicans owned Congress at the time, so a 17% approval rating should be a clear message they’re missing their mark.

Most Democrat-proposed ideas are around more stringent background checks, or limiting certain types of weapons, the latter of which, I think is misguided, but I’ll save that for another time.

Both parties agree that guns shouldn’t be in the hands of violent felons, or those with a diagnosed mental disorder.

But the problem for Republicans often arrives when Democrats propose what might be reasonable background checks, the bill is only one page of such reasonable checks Republicans might be open to agreeing to, but then a myriad of other pages of pork-like special favors for their district or other provisions that have nothing to do with the issue at hand.

Republicans are just as guilty of doing the same on other issues, so no one party is innocent of this. But if both just stuck to passing simple single-item bills on the issues where they agree, they’d be far more effective and win over the American people.

Show that you’re willing to find common ground publicly, and emphatically, leaving the Democrats looking like the only ones not willing to work towards progress. If Democrats argue, “these provisions don’t go far enough,” Republicans can simply put it back on them by saying, “This is what we already agree on. So let’s pass this first, and if it doesn’t help, we can discuss further measures later.”

Democrats often cite the gun show exemption to background checks as a big problem, and frankly, they’re partly right, even if they’re disingenuous in their presentation of the issue.

The fact is that gun dealers at gun shows do in-fact do background checks. However, if you’re a private person who has a .22 caliber pistol for instance, and you’d like to upgrade to a 9mm pistol, you can take it to the show with you, and if some other private person like you who’s there (not a dealer or vendor) has a 9mm but wants a .22, then you can legally make a private citizen trade. This is just like you would do if your neighbor decided they wanted to sell or trade with you, it just happens on the premises of a gun show.

Instead of just shooting down every idea Democrats have, Republicans could admit that maybe there are things that could be done, that aren’t an undue burden on law abiding citizens, to help clean up this “loophole.”

It could be something as simple as having people fill out a background check upon entering the show, if they’re considering buying or trading, and let them shop to their heart’s content from there. If they don’t pass the test, there’s really no reason for them to enter the premises of a gun show in the first place.

While I’m not saying that’s the answer, things like that can certainly be deemed a reasonable measure to prevent guns getting into the wrong hands, and are at least worth discussing in earnest.

Myth #3: Guns are the biggest problem

This well put together bit of data, and rather insightful graphic from the math geniuses at 538 points out that there are approximately 33,000 gun deaths in America each year, and this number is often used to denounce guns in general. But let’s put that in perspective as well as break those numbers down. 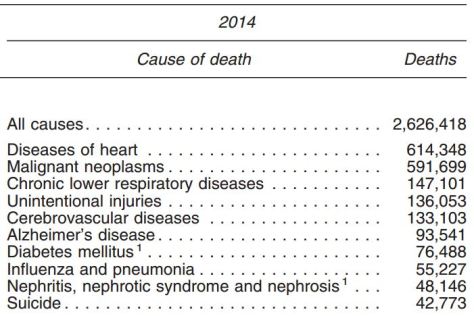 By comparison, more than double died from diabetes, nearly three times as many from Alzheimer’s (which took my father last month), and nearly twenty times more died from heart disease.

As the 538 article also shows, nearly two-thirds of those gun deaths were suicides, and a small percentage were self defense, or police shootings of criminal suspects.

While I think we all agree suicides are tragic, as a libertarian, I believe that you own your own body, and have the right to end it whenever you like.

My own grandfather was quite ill when he shot himself, and having already lost my grandmother years earlier, he didn’t want to burn through what little he had saved for his kids by chasing a terminal disease. While you may not agree with it, that was his choice and you should respect it.

But no matter what side of suicide you are on, it cannot be fairly called an act of violence, nor the fault of a gun. So those acts should not be considered when discussing gun violence, and I think those with an anti-gun position should be fair when presenting such arguments, no not cite 33,000 number, but instead, the 10,000 or so that were potential murders or manslaughter, versus suicides and justifiable homicides.

All that being said, 10,000 wrongful deaths is still a large number of people, and is incredibly tragic. It is a small percentage, but certainly statistically significant, and Democrats have fair cause to want to do something to lessen that number. Even if we disagree on their proposed methodology, their altruistic intentions should be evident and respected.

These are three of many arguments from both sides that are the first that came to mind to me. But I’m sure you can think of many more.

The bottom line is that Democrats should know most Republicans don’t want to put guns in the hands of bad people. They just don’t want law-abiding citizens to have their rights violated and disagree on how to go about preventing it.

Republicans should know that most Democrats don’t want to disarm America, they want to prevent wrongful deaths, and they think less guns will achieve said goal.

Until both parties in congress, and the party-faithful voters who make their voices heard on social media learn to understand, then be understood, these immature and dishonest tactics will continue to ensure that America doesn’t advance in any meaningful and constructive way.

We’re all smart enough to know better, it’s time we acted like it.