As modern-day statists decry or attempt to explain the Constitution; something they often neither respect nor understand, they use the example about yelling “Fire” in a crowded theater as an example of how the restrictions of government as enumerated in the Constitution are not absolute, are outdated, and sometimes just wrong.

Regarding the absolution of it; I assure you that while the Constitution was designed to be amendable if We the people overwhelmingly agree to do so, it is absolute; or at least it was intended to be. Yet, arresting someone for falsely yelling fire in a crowded theater, believe it or not, does not violate the 1st amendment in any way. It can, and should be a crime without freedom of speech having ever been infringed upon.

Last week in my article Why Can’t I have a Nuclear Warhead, I explained how owning an AR-15 versus owning a nuke is a frivolous argument that people who wish to abandon our Constitution often use. So this week, I’ll do my best to debunk this one as well.

If you are in a movie theater, you may freely say the words fire, bomb, I just farted, or whatever else you may exclaim that could scare the heck out of everyone if said loud enough.

Conversely, if there were a fire, you would be right, and frankly a hero, to warn everyone by yelling “Fire”. This being true, using those words in a theater will not get you arrested as a general rule either when appropriate.

The issue is not the action of exercising your free speech, it’s about creating a hazardous environment for people by virtue of yelling fire or any other method you might use. Because this then creates a panic, and thus a dangerous situation where people could be trampled or otherwise harmed in some way as they attempt to evade a danger that only existed in your sadistic mind. You could pull the fire alarm, not yell anything, and you’d be guilty of the same violation; so the speech used is never the issue.

By creating a panic, you infringe on someone’s right to life, as enumerated in the Constitution, since a panicked crowd becomes a serious health hazard to everyone involved. 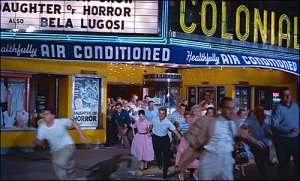 Sadly, our Constitution is misunderstood, violated, and under attack every day. As Americans, we should understand that the Constitution was right long before we even fully understood how to implement it. We were slave owners declaring all men are created equal with certain unalienable rights, after all.

The Constitution has never been the problem—it had it right all along. People violating it has, and always will be. So let’s not let the left destroy it with false premises, logical fallacies, or misdirection. We the people should take the time to read, understand, protect, and promote the Constitution responsibly. Our liberty depends on debunking such false arguments. Hopefully, as people like me explain away them, you’ll be better prepared for your next debate.